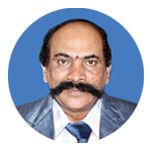 Dr. S. Jeyakumar is basically a Media person. He served in “THE DAILY THANTHI” from 1987 to 1996. Later he joined as a Lecturer in the Department of Zoology, Aditanar College of Arts and Science, Tiruchendur on 19.06.1996.

He served as an Associate Professor of Zoology from 2010. He studied P.U.C., B.Sc., M.Sc., and M.Phil., Zoology in Thiagarajar College, Madurai and did his Ph.D. Zoology in V.O.C. College, Tuticorin. He organized five seminars and workshops while he was serving in the department. He participated and presented many papers in the State level and National level seminars.

He served as a coach for the Volley ball team of Aditanar College from 1997 to 2003. He also served as a care taker of N.C.C. Naval Wing of our college from 1999 to 2000. He received the Best Camp Organiser Shield from the N.C.C Naval Wing of Thoothukudi. He did a valuable contribution to the college hostel as Deputy Warden from 2009 to 2016. He served in the Student Welfare and discipline committee from 1996 to 2017.

On 10.09.2019 he joined as the Secretary of Aditanar College of Arts and Science, Tiruchendur.